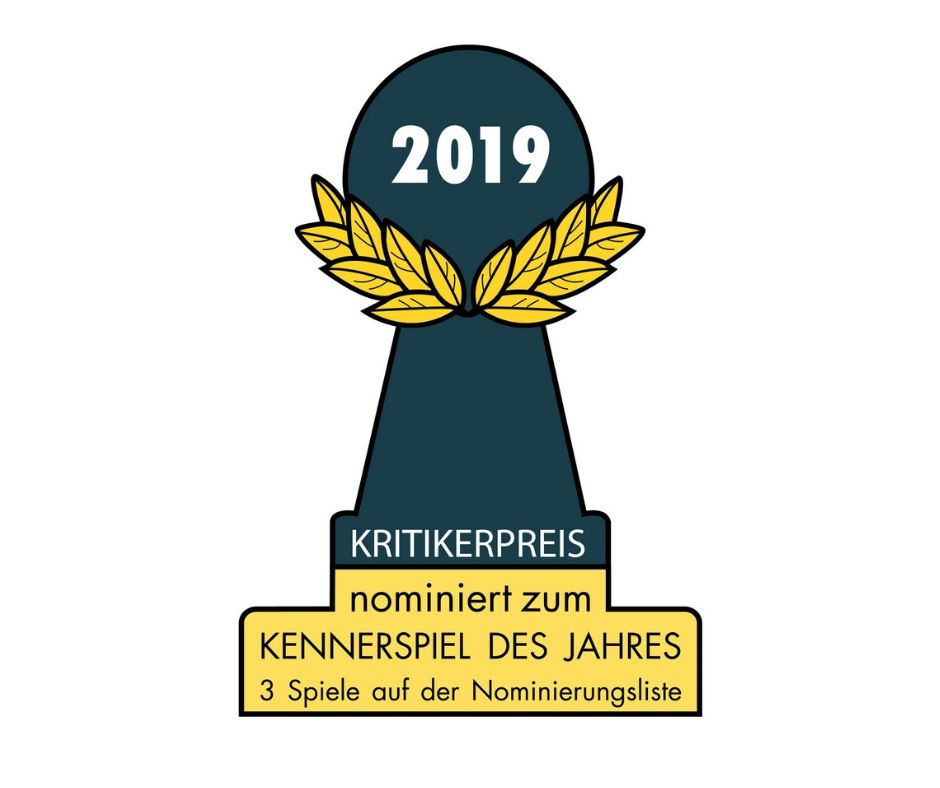 The three nominees for Enthusiast Game of the Year 2019 award are;

Carpe Diem is a sophisticated and intriguing tile laying game with high replay value due to its variable game play. In this exciting game set in old Rome, you aim to get the most prestige points at the end of the game to win. In order to do that you must adhere to the motto of “Carpe Diem”. You have to seize the day by harvesting grapes and catching fish, then sell these wares on the market to make money. As a rich patrician in Ancient Rome you have to built lucrative districts and fulfill their demands.

In Detective: A Modern Crime Board Game, you are one of the members of Antares National Investigation Company and you have to solve five different cases in a specific order. The game is not competitive; all players are in the same team. So, you get to hone your communication skills as you gather valuable piece of information and deduce clues with your co-players. What is more, the setting is super modern; there is even a dedicated online database which you will browse for suspects, evidence and clues. The game manages to combine successfully the classic, card-based, puzzle-solving gameplay with the technological advances of 21st century.

Wingspan is a competitive, medium-weight, card-driven, engine-building board game from Stonemaier Games. You are bird enthusiasts—researchers, bird watchers, ornithologists, and collectors—seeking to discover and attract the best birds to your network of wildlife preserves. Each bird extends a chain of powerful combinations in one of your habitats (actions). These habitats focus on several key aspects of growth: gain food tokens via custom dice in a birdfeeder dice tower,lay eggs using egg miniatures in a variety of colors, draw from hundreds of unique bird cards and play them. Finally, the winner is the player with the most points after 4 rounds.

From Stonemaier Games, the publisher of Wingspan.

In addition, the jury of Spiel des Jahres awards released a list of 4 game recommendations for the “Enthusiast Game of the Year” category.

1.Architects of the West Kingdom

Architects of the West Kingdom is set at the end of the Carolingian Empire, circa 850 AD. As royal architects, players compete to impress their King and maintain their noble status by constructing various landmarks throughout his newly appointed domain. Players need to collect raw materials, hire apprentices, and keep a watchful eye on their workforce.

A dyke is intended to protect the usable area on the North Sea coast from flooding. But will his height be enough? The answer depends on the imponderables of nature. And the cohesion of the people. In the strategy game Deep Land, players must decide how to profitably divide their involvement into dike construction and sheep farming. To do this, they send workers who either raise the rampart or enlarge the pasture behind the dike. Sloshes at high tide the sea over the edge, the price of sheep drops and the work on the dike receives increasing recognition. Anyone who has shown too little sense of teamwork is punished in these moments with dyke break markers, which can be really expensive in the end. For then, when the dike does not withstand the final storm surge.

Knowledge of science and technology is growing at a rapid pace. Intellectuals all over Europe are creating their magnificent works and making breakthrough discoveries each and every day. Names like Newton, Copernicus, and Galilei are becoming known worldwide. In this rapid expansion, who will be the next one to add their names to the list? Players are looking to gain knowledge and expertise in various areas, studying all across Europe and meeting with the great Masters to learn from them. One will earn world-wide fame for their contributions to science.

In the tactical card game Paper Tales, players build kingdoms whose subjects are subject to aging and usually survive only two of the four rounds. A merciless game? No, a dynamic that wants to be discovered over several games! At the beginning of four, later up to five cards, players may place in their kingdom. Knights, for example, increase combat strength for duels with neighbors, timber traders bring resources for building, and the Dragon allows for special actions. Some cards complement each other well, but do they come into play? And if so, when? In addition, the own kingdom is far too small to accommodate all the units that you would like to use. Here, the agony of choice becomes a gaming experience.

So, have you played the games nominated? Which do you think will be the winner?