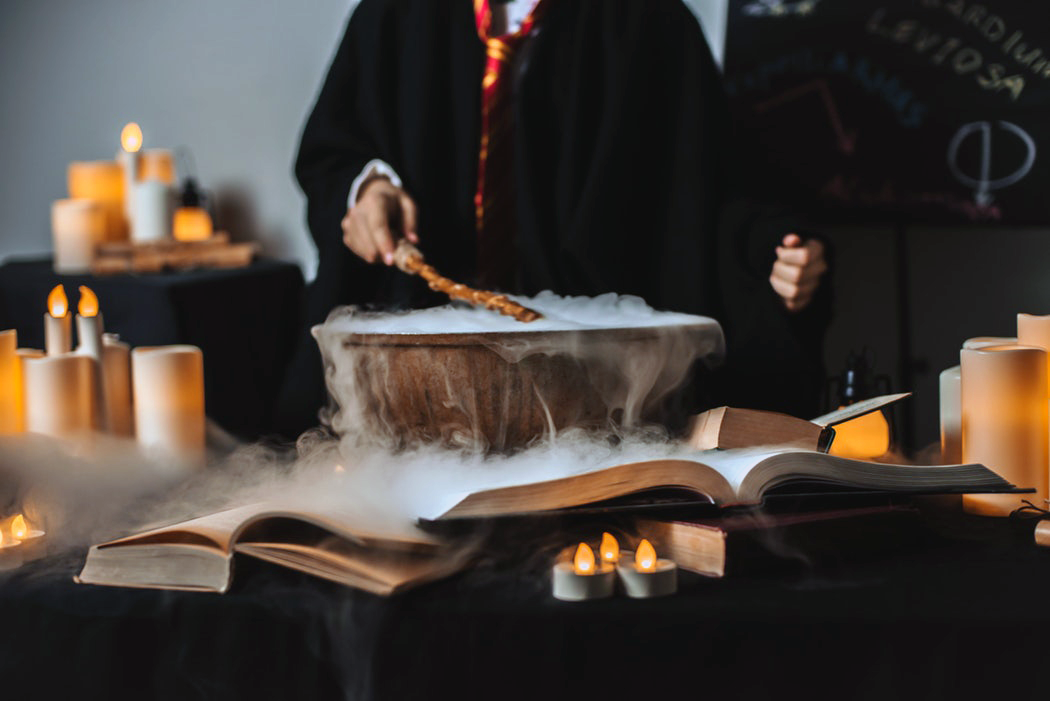 A Harry Potter board games list with the most high-rated games.

Hogwarts Battle is a cooperative deck-building game where players take the role of Harry, Ron, Hermione or Neville.

They must protect the castle of Hogwarts from evil forces and dark magic.

Each player has its own deck of cards that is used to get resources and as the game proceeds they add cards to their deck and become stronger.

There are character cards, magical items, spell cards and cards which allow them to replenish their health statistics, fight the villains or prevent them to gain power.

In addition, the dark villains fight back and attack, practicing Dark Arts, and players must work together in order to protect Hogwarts from the sinister forces.

If you have played Harry Potter Hogwarts Battle and you really liked it, you should know that a game expansion has been published.

Now, you can play the game as Harry’s quirky friend, Luna Lovegood, and venture into the Forbidden forest with the Monster Box of Monsters.

Protect the World of Wizards and be ready for an awesome adventure.

The game is based on Fantastic Beasts, the prequel of Harry Potter world.

Newt Scamander loves weird magical creatures, nurtures and heal them. Most of them are ferocious and dangerous.

A simple mix up leads to magical creatures’ escape in New York city and players must find and contain them in Newt’s suitcase.

You can play the game as Newt Scamander, Tina Goldstein, Jacob Kowalski, and Queenie Goldstein. Collect sets of dice, draw cards, use the unique powers of each character to shield your friends and return the magic beasts into Newt’s suitcase before the muggles see them and disaster follows.

Harry Potter Magical Beasts is a roll/spin and move board game.

You take the roles of Harry Potter, Ron Weasley, Hermione Granger or Ginny Weasley in an adventure to search and discover magical beasts outside and inside Hogwarts.

You have to collect clues to track down the beasts and be careful not to wander around and get lost.

Save the castle of Howgarts from the dangerous beasts and protect students and professors.

An action- packed board game, which contains a plastic popper game board with enclosed die.

You participate in Triwizard Tournament and you are inside Triwizard maze which is filled of strange creatures and obscure magic. Are you ready to be the first player, who will find the tournament’s cup and be the winner?

Harry Potter HedBanz is a board game for parties consisting of little Harry Potter’s fans.

Players take turns guessing what’s on their card by asking “yes” or “no” questions. Each correct guess earns one chocolate frog token. Collect 5 and win!

It is a quick-play Trivial Pursuit game that can be played on-the-go with its portable wedge holder.

The most important is that contains 600 questions which range in difficulty levels, so the game doesn’t lose on the excitement and challenge department.

Are you a true fan? Can you answer correctly 1800 questions from all the 8 movies of Harry Potter’s magic world?

Move around the board with House Mascot movers as you answer questions and collect “wedges”.

I am almost sure that you have heard the board game Codenames.

Codenames : Harry Potter is the Harry Potter- themed edition of Codenames. The great game play of the original game plus the magic world of Harry Potter.

It is a fun, easy-to-learn cooperative word and picture deduction game for Harry Potter fans of all game levels.

Players help their teammates locate secret Agents who are concealed among a grid of Harry Potter references. Use only one-word clues to guide guessers to the right spots, or hidden Death Eaters will cost them the win.

A Niffler is a magical beast from the world of wizards with a long snout and a coat of black fur. They are attracted to shiny things, which make them wonderful for locating treasure, but this also means that they can wreak havoc if kept (or set loose) indoor!

The objective of the game is for each player (2 players) to load up the Niffler with jewelry and coins until they spill into the briefcases.

The first player to spill the jewelry and coins wins. The game includes one Niffler on a rocking base, two wands, 64 coins, and necklace pieces.

Solve the mysterious disappearance of a fellow student from the famous School of Witchcraft and Wizardry, playing as Harry, Ron, Hermione, Ginny, Luna or Neville.

You must discover who did it, what spell or item they used and where the student was attacked.

During the round, wheels on the board will keep changing, revealing secret passages, moving staircases, the Dark Mark will appear and you have to recruit special allies, use spells and unique items.

Showcase your knowledge of J.K Rowling’s Wizarding World when you encounter 1,000 picture trivia questions featuring the beloved characters, extraordinary places, magical creatures, and enchanted objects from the epic HARRY POTTER™ and Fantastic Beasts and Where to Find Them films.

It’s a game of teamwork – with a competitive twist. Sometimes you’ll work together and other times answer alone, but you’ll wager your points every time.

Labyrinth is Ravensburger’s hugely popular board game for kids and adults. The main objective is to find the shortest route through the labyrinth to win.

A classic game combined with the exciting world of the famous wizard.

The Harry Potter Miniatures Adventure Game is a board game for two or more players, each taking control of a set of finely detailed resin miniatures, representing their faction, or group, of witches and wizards.

During the game, players must resolve challenges and objectives, make clever use of potions, spells and artifacts.

In addition, the game contains a huge variety of meticulously detailed miniatures, allowing fans of the cinematic saga to collect, paint and play with their favourite characters.

Finally, there many older editions which is hard to be found and cost a lot.