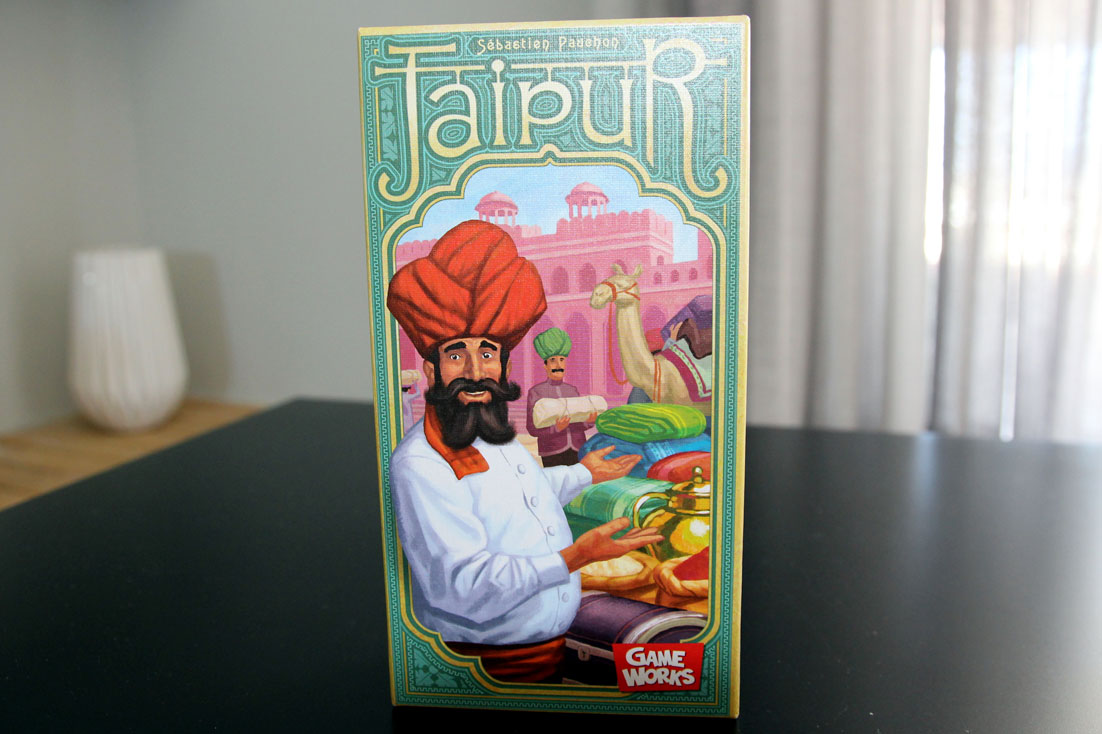 Jaipur is the capital of India’s Rajasthan state.

It is also a fast-playing card game that I highly recommend! I spent a fair amount of hours playing Jaipur and I never got bored.

Let’s proceed to the review of Jaipur card game!

SO what’s the deal?

Imagine that you are one of the most powerful traders of Jaipur (the other one is your opponent) and you want to be the personal trader of Maharaja. In order to accomplish that unique achievement you have to earn two seals of Excellence by making successful sales and getting richer than your competitor.

What’s inside the box?

There are 55 goods cards (we are talking about really lavish goods including diamonds, gold, silver, cloth, spices, leather and camels). Each player takes 5 of these cards while 3 camel cards are placed face up between the players at the start of the round.

There are also 38 good tokens which are given to a player after a sale and 1 camel token. Each good token has a specific value (for example the first diamond tokens are more valuable than the first leather tokens). The player, who has collected the most camel cards, wins the camel token at the end of the round.

In addition, you will find 18 bonus tokens, which are earned by selling three cards of the same good (diamond, gold etc) and more at once. So is in your best interest to collect your products and not discard them for sale (you can sale expensive goods such as diamonds, gold and silver only if you have two cards and more of the same good).

Finally, there are three “seals of excellence” with a face of handsome man and his glorious turban. The winner, a.k.a the person, who has the biggest amount of rupees, takes one “seal of excellence” at the end of the round.  He, who first collects two seals, is the winner of the game!

The most boring part of playing a board game is the set up. But Jaipur’s  is truly easy and not complicated. All you have to do is follow these little steps:

And what about the gameplay?

The gameplay is simple yet amusing. On your turn you can take cards or sell cards but never both. If you decide to take cards you have three options : to take several goods and exchange them with the same number of cards, to take a single good and replace it with the top card from your deck or to take ALL the camels from the deck and replace them by drawing from the deck.

The camel cards should be gathered in one pile and the opponent must not know the exact number of your herd. You can exchange the camels for goods.

So, If you hold two diamond cards and there is a diamond card on the deck, I strongly suggest to take this single good. During your next turn you can sell the three diamond cards and gain three good tokens and a bonus token, maximizing your final score.

To sell cards, choose one type of good and discard as many cards as you want and then take as many tokens as cards discarded (starting at the top of the corresponding row with the highest value). The tokens’ values decrease as the game progresses, so you’d better be quick and sell your goods in time!

Don’t forget that a player can’t have more than seven cards in his hand at the end of his turn.

The round ends when three types of goods token are depleted or when there are no cards left in the draw pile to refill the market.

Then each player counts his rupees and the richer wins the round and collects a seal of excellence.

As I mentioned in the beginning, the player who first collects two seals is the winner of the game and becomes the Maharaja’s trader!

Play it or leave it?

Play it of course! I enjoyed playing Jaipur so much! The rules are simple and well calculated.

The whole game offers a great balance between luck and strategy.  You should pay attention to your opponent’s moves and how to you use your camels as well as the precious and expensive good cards. An enjoyable and engaging card game without a doubt!

15 thoughts on “Review of Jaipur card game | Bring on the camels!”